Trey Songz introduced his new album Tremaine today and went on The Breakfast Club to discuss it. It was hard to listen to what he was saying since the bling bling on his wrist kept causing a diversion. 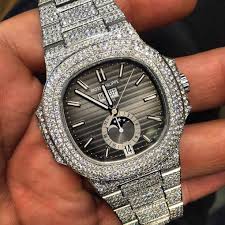 He’s sporting an iced out Patek Philippe Nautilus chronograph with diamonds everywhere. It looks like a white gold 40th Anniversary blue dial version (Reference 5976/1G), but it’s hard to grab the subdial at 6:00. In the event the anniversary edition, it might be the the regular blue dial chrono model 5980/1A reviewed here by Monochrome. 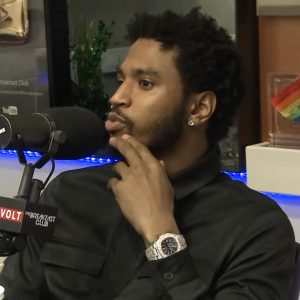 The anniversary model is all but 4mm wider in diameter than the standard 5980, therefore it would be a great option. Plus, the anniversary version has diamond markers on the dial straight from the factory.

Either way, it is nevertheless a Patek and we’re glad to see R&B singers and rappers elevate their horology game. Even if they really do things such as the Pee Pee challenge… 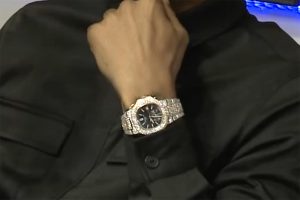